You are here:
First Fridays 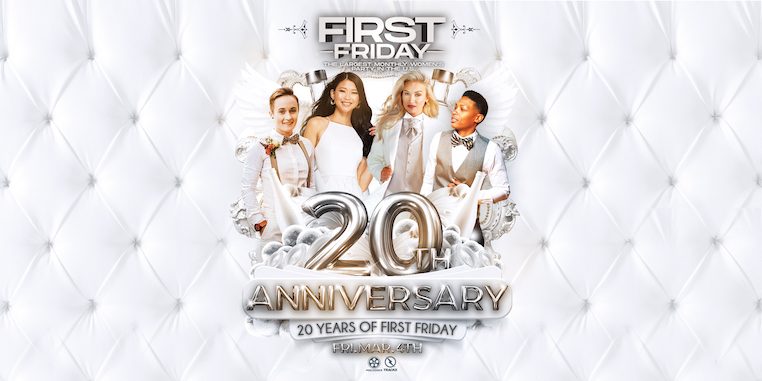 20 Year Anniversary for Largest Monthly Women’s Party in the U.S. Invites You

to the Monumental Celebration

Denver, CO.– February 10, 2022— Although Babes Around Denver (BAD) founder, Dede Frain, didn’t know it, her effort to pull friends together in a common meeting place would twenty years later become a legacy in the Denver LGBTQ community.  This “group of friends” gathering has morphed into the nation’s largest monthly women’s party and become a networking hub for the Denver area LGBTQ community and their supporting friends.

Babes Around Denver is responsible for the epic First Friday party at Tracks Nightclub— mixing up the first Friday night of every month with creative themes and booty shaking entertainment.  Hosting multiple rooms, local, and international DJ’s, go-go dancers, food trucks, and an A-Team of bartenders, security, and management staff, it is no wonder the First Friday party scene has been rocking us for 20 years. Guests ranging in age from 21 to 80+ attend every month and numerous friendships and relationships have evolved as a result of connections made at First Friday.

The First Friday party vibe and Babes Around Denver is underscored by the organization’s effort to also be socially and recreationally responsible, in and for the community.  “It’s important to me that First Friday is more than just a party,” says Frain. “We’re here to create community, and to give back in meaningful ways.” BAD has consistently donated a portion of event proceeds as well as its time and resources to more than 35 different organizations throughout the past 20 years. BAD is a long time PrideFest sponsor, and hosts the “Official” Women’s Pride Party every year.

Reserve the upcoming First Friday, March 4th, 2022, for this monumental 20-year anniversary First Friday celebration.  Channel your LGBT mojo, grab your “group of friends” and continue this party that is a pillar of the Denver area LGBT community.  Tracks Nightclub, Denver’s premier LGBTQ club, has been the party place for First Friday and remains the place to be for the 20th anniversary blow out.

Doors open at 7PM with country western music— free your inner Colorado Cowgirl…or Cowboy.  Then— starting at 8PM, get your dance on as multiple DJ’s in multiple rooms spin Top 40, Retro, Latin, and Hip Hop to honor 20 years of diversity and community. Local performers will provide entertainment throughout the evening

WHO:  More than 1,000 of Colorado’s LGBT women, community, and friends.

WHERE: Tracks/Reelworks Nightclub and Event Center

WHY:  To show our colors, to celebrate 20 years of community coming together, to be BAD

STAY IN TOUCH WITH US