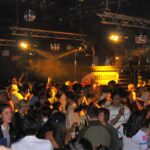 DENVER — A decade ago — long before the Colorado Civil Union Act, long before a sitting president ever endorsed full marriage equality, long before gay and lesbian service members were able to openly serve their country — a sisterhood was born. And that sisterhood knew how to have a good time.

Entertainment for the evening includes DJs Markie, Blaque Gurl, Shannon and Tatiana and dance performances by local troupes as well as complementary appetizers until from 7:30-9:30 p.m.

“I am humbled, grateful, and still surprised by the last 10 years,” said Babes Around Denver Founder Dede Frain. “What I am awestruck by is the diversity of people who attend every month. Women, over the age of 85, dance to country western music, while just a few yards away, a group of 21-year-olds are slow moving to hip hop. Gay men, transgender and straight guests just love the scene and feel very welcome. It warms my heart to see all these people just being together — this simply did not happen 10 years ago.”

While the First Friday party has grown and evolved — much like the nation’s and state’s attitude toward the LGBT community — the commitment stays the same: provide lesbians and their allies a safe space to foster relationships, and give back.

“I think women still like to mingle with other lesbians — where they can dance their asses off and not have a care in the world,” Frain said.

A portion of the proceeds from every First Friday event is donated to nonprofit partners including the GLBT Community Center of Colorado, The National Center for Lesbian Rights, The ATL Foundation and several other local charities.

WHO: More than 1500 of1500of Colorado’s LGBT women and their friends and allies
WHAT: Babes Around Denver’s First Friday party’s 10th anniversary
WHERE: Tracks/EXDO Event Center, 3500 Walnut Street, Denver, CO 80205
WHEN: 6 p.m -2:00AM., March 1, 2013, ages 21+, cover starts at $5
WHY: To celebrate 10 years of having fun while doing goodONLINE: http://babesaroundenver.com; http://facebook.com/denverbabes;http://twitter.com/denverbabes